Perhaps at first glance it looks like evidence of an extraterrestrial invasion, a field of Teletubby egg sacs spread across the rocky plain. It is, in fact, la llareta (Azorella compacta, neé A. yareta), apparently a relative of parsley. The dense-growing evergreen perennial flowering shrub is found in South America. What makes llareta fascinating is not that the flowers are hermaphroditic, nor even that the species’ adaptations over the years make it unsuitable for growth in shade. Rather, it is that these organisms live for thousands of years. Some llareta in the Atacama are known to have survived over two millennia.

And if that isn’t enough to blow your mind, Katherine Brooks brings the news about a new book by Rachel Sussman, The Oldest Living Things In the World: 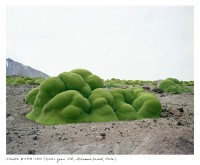 For nearly a decade, photographer Rachel Sussman has been traveling the globe in search of the world’s oldest living things. From the Mojave Desert to the Australian Outback to Greenland’s icy expanses, she captures portraits of life forms so relentless they’ve managed to survive eons of planetary change. An 80,000-year-old colony of aspen trees in Utah and a 43,600-year-old self-propagating shrub in Tasmania rank amongst Sussman’s unlikely subjects, just two of the many plants, fungi and invertebrates catalogued by her lens.

Gathered together in a book published this Spring, and aptly titled “The Oldest Living Things in the World,” the collection of age-old organisms serves as a stunning visual history of Earth’s extreme inhabitants. The collision of art and science is hardly just a visual feast of the past, it’s also a reminder of what the future might leave behind, as climate change and human endeavors threaten the existence of these millennia-old characters.

Sussman worked with biologists to complete the research for the project (not to mention science writer Carl Zimmer has provided the foreword and Hans Ulrich Obrist the essays for the new tome), and the photographer has worked tirelessly to bring awareness to the fragile nature of stromatolites, moss and other overlooked living things. Her 2010 TedTalk educated the world on 2,000-year-old brain coral off the coast of Tobago, while an article posted to Brain Pickings lamented the death of a 3,500 year old Cypress tree.

Have your say .... Cancel reply