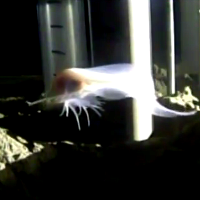 The modern era sometimes tends toward a headline culture, a tendency to skip the detail in order to receive as much of the information spectrum as possible. Consider the bland headline for Rebecca Morelle of BBC News, “New Record for deepest fish”. In and of itself, certainly that might be a reason to check in, but it is also true that few of us are rushing to check the sumsα.

But Morelle’s article is written in that classic Beeb voice, with shorter sentences and paragraphs for comprehensibility, and scrolling through one finds astounding bits and pieces—

Until this expedition, the deepest fish had been found in the Japan Trench, also in the Pacific Ocean. A 17-strong shoal of pink, gelatinous snailfish (Pseudoliparis amblystomopsis) were recorded 7,700m down.

Dr Alan Jamieson, from Oceanlab at the University of Aberdeen, said: “After we found these, we started seeing them in other deep trenches. Each trench has its own snailfish species.

—including some that probably deserve their own headline:

During the voyage, researchers also studied the geology of the Mariana Trench by grabbing rocks and returning them to the surface.

Prof Patricia Fryer, from the University of Hawaii, told the American Geophysical Union Fall Meeting in San Francisco that a sample collected from an earlier expedition suggested that a previously undiscovered tectonic plate lies at the bottom of the trench.

“The rock we picked up – it turns out this thing is 100 million years younger than the Pacific Plate,” she told BBC News.

“It means that the plate that’s being subducted beneath the Challenger Deep (the lowest point of the trench) is 100 million years or more younger than the Pacific Plate.”

We are nowhere near finished exploring this wonderful, mysterious planet. Fascination abounds.

α Rachel Feltman of The Washington Post posted more precise numbers; 8,143 meters for the new species, compared to 7,703 for the previous record holder, a difference Morelle describes as “beating the previous depth record by nearly 500m”. As far as headlines are concerned, Feltman wins hands down: “Ghostly new fish discovered at record-breaking depths”.